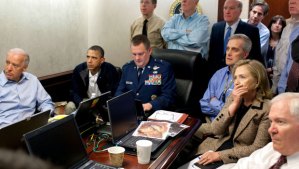 By now we have all seen the videos and the pictures and the countless talking heads that have yammered on about the events in Pakistan and President Obama’s leadership in taking down Bin Laden. There are at least two points that we should all learn from these events.

First, sometimes as leaders we have to make hard decisions in which everything is at risk. The decision to send the SEAL team to Pakistan to complete their mission could have been the end of the Obama presidency. Had the mission failed, this event would be spoken about in the same way that President Carter’s mission that ended in crashed helicopters and dead soldiers in the desert was discussed: A poorly conceived and executed plot that ended badly. Obama’s stature as a leader and the US’s reputation in the world would have been badly damaged. The Pakistanis would have been able to say, “If you had been good partners and told us about this ahead of time, we could have helped you.” Obama would be running out the clock to January 2013.

The second point is that when you make a decision, you have to stick with it and be there to see it through to the end. This is not to say that we cannot change and adapt to changing environments, but we do have to be committed, and lead others through the initiative. Obama’s riveted focus on the mission in the now famous situation room photo – with his staff gathered around, fixated on the unfolding events – gives us a taste of his commitment. Are you as committed and focused on your initiatives?

This is not about politics, nor is it about the ethics of the decision to pursue this action. It is about leadership and being fully vested in your decisions. We saw history this past week, and it will serve us all well to learn from it.

Owner and President of Resu-mazing Services Company and driven to help people improve their lives by helping them with professional career marketing strategies and online reputation management services. View all posts by Bill Florin